My brave, introverted wife marched yesterday in Boston while I took the kids to the park and cleaned up the house. It's the least we both could do. 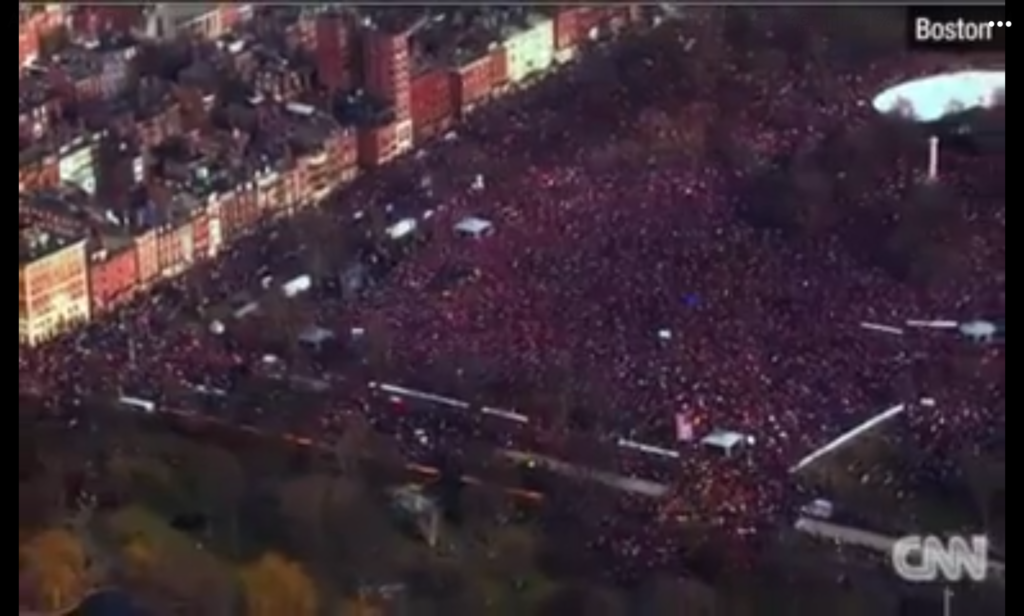 After a political turnover that can only be compared to falling down a rabbit hole and ending up back in the 50s in a communist Russia run by a crotchety, ignorant oompa loopa, this is what America has come to. Some of our most intelligent, kind, and confident people having to protest for freedom, upholding basic human rights, and against bigotry.

America: So Bad, Even Introverts Rally

I am my wife's husband. We are very different. The way she recharges is to stay in doors and knit something. I like to stay out late and meet new people. But that's what she did yesterday. She went with an extroverted friend and surrounded herself with 110,000 other people because involvement matters. She hugged a college student and they both started crying together in public. 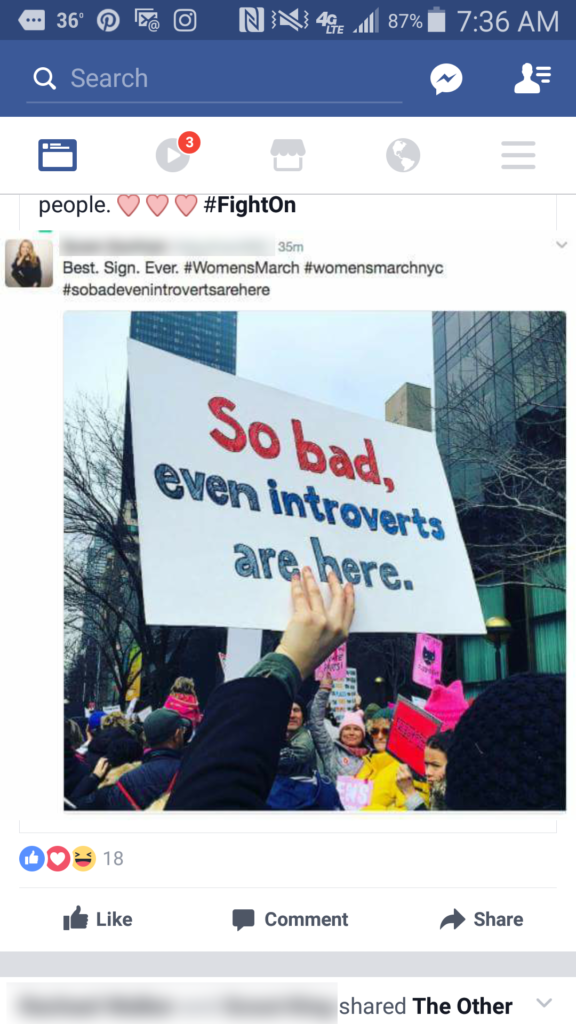 That's why she's brave in my book, because in her book these kinds of extroverted things don't happen, but they do when it matters.

Since I wasn't there, I didn't get to see city residents supporting the cause from their windows stories above the march. All my worst fears after the Boston marathon bombing were unnecessary because there was not a single reported negative incident. Service vehicles that blocked off the streets from traffic honked their horns in solidarity as people proudly walked by...that's what my wife came back with, a story of hope and meaning.

After over a year of thinking about what lead up to this, I would like to offer a few thoughts, and one big suggestion.

Most of our current representative government is awful. They're just awful. Both sides, but what I really mean by 'most sides' is most of the majority side.

What other options to we have? Let's recap.

Elisabeth Warren takes to task any politician who practices corruption, champions education and equality, or supports the subjugation of others. Why the fuck isn't she our president already? The short answer is that for all her rights, America is still so sexist (even women) and she's so left that it would be hard to expect a majority of voters not to mention our current political complex to accept her...

...but oh wait, Washington just elected the Actual Antichrist (if you believe in that sort of hoo haw), so I guess it's entirely possible to get a left-wing presidential candidate who is overqualified and underrepresented elected in 2020. Let's focus our party efforts to do just that.

Or how about Bernie Sanders, the candidate that we the people never got the chance to vote for. During protests across the world yesterday against This Desolation Presidency, our Bern spoke out for human rights in his home state.

Are you kidding me? I actually feel a little mentally disabled when I think about how this guy lost in a race against Fat-Fingers McGrabspussy. Are we blind, deaf, dumb, stupid, or all of the above for not giving him an oval room to run the free world?

If a majority of white America can't yet accept that a women should truly be leading us as a global power at this point, then Sanders was the most obvious and amenable solution to our current State of Bias.

Accept and move beyond our mistakes

We can't ignore our mistakes without being doomed to make them again.

The Democratic party gambled on a risky political figurehead and lost BIG. There was enough time and examples of Russian-colluding rhetoric before the primaries to expect that the presidential race would be fought dirty, and picking a candidate carrying so many possible vectors of attack was a poor choice no matter how progressive or technically qualified they were.

DNC leadership failed not only its constituents, but all of America by driving the Republican party to put up such poor choice traditional candidates such as Ted Cruz and Ben Carson that conservative voters would rather side with a small-minded (and small-handed) demagogue than ever consider voting for the other side.

We have to fix that now, there is no good 2020 outcome without a reboot.

Disinformation also needs to be a solved problem by next time around. I'm not talking about simply plugging our security gaps, I'm talking about educating people on how to filter opinion from fact. The battle is fought one person (not article) at a time.

Informational literacy enables people to form their own ability to think rationally and critically about what's being presented to them. Everyone is biased, and everyone deserves to work their own flaws out; but being able to agree upon basic facts starts by teaching people (especially those still in formative stages) how to distinguish and agree upon facts.

Listening is also a mandate next time around. Confusion and intolerance about a bad idea is fine, but let that go to far and it blinds you to what may actually be going on. Free speech applies to idiots, villains, thieves, and zealots too, sadly. Clearly, I'm okay with name-calling and sometimes irrational arguments. but keep in mind that shutting people out of communicating their bad ideas doesn't kill the bad idea; it just incubates it.

A Solution for Next Time Around: Inclusion Beyond Under-representation

So let's do this. Let's adjust the strategy to include, not exclude, both our hopes and our reality. Let's continue to fight for human rights, stand up for others who don't have the same level of privilege as us, and remember that even people with bad ideas are people who vote.

We can and will hijack enough mindshare in the next four years to vote based on better ideas, but it will take patience, tolerance, and perseverance. Who knows, maybe we'll learn something about how to change people instead of just saying that we can. That's a party I'll belong to.