This chick I know, I interviewed her last week for my upcoming podcast debut. She's phenomenal in a way that makes me so proud, grateful and humbled all at the same time. Sufficed to say, I found a place to put one of the ideas I had been holding on to ever since I started going to the Women In Tech group at my work:

Trust me, I'm a subject matter expert on this. I'm so white, I made the vanilla ice cream we had for dessert tonight say "daaaaammn!" (then I ate it up). And though I'm not into sports and don't have lots of chest hair, I am definitely dude.

I'm the kind of dude that wants to help. I have a son and daughter and I want the world to be a less sexist, less broken place by the time they are out in it. It's that attitude I look for in others, not the other things that differ between us.

Yet it still remains, there are huge imbalances in society no matter what angle you look at things from. Good intention matters a little, but action in the face of injustice matters a whole lot more. It's what you do that defines you to others most because only a few people in life will ever spend the time to see past that.

What Can We Do to Help?

The difficulty with things like gender inequality, under-representation, privilege, and inclusion is that they're too nebulous/vague/ethereal for the side of the crowd that can/should/doesn't do something about it, namely white dudes, to take action on a daily basis. It's not that we're white or that we're dudes, but for whatever reason, many dudes just need practical instructions, marching orders, or technical requirements to move from well-meaning to noticeably effective.

So I wrote some specific tips down. Their implementation might differ from person to person, so I wrote them in their most generic form: 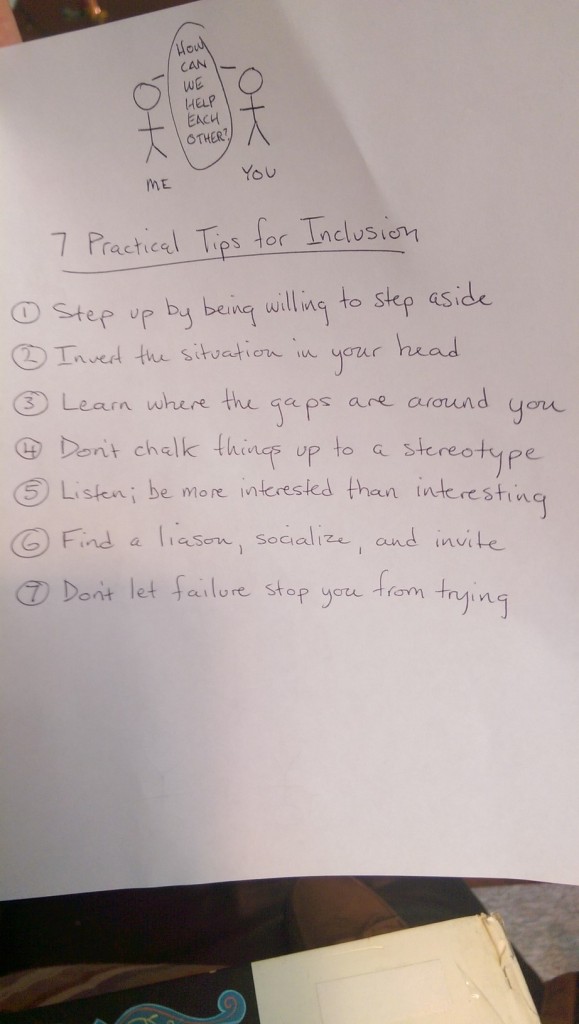 Since they aren't exactly marching orders, more fortune cookie mnemonics, I'll put down some examples. They apply to all people, not just dudes to women, white people to everyone else, they apply to people who want to help other people. For the sake of this article, I'll write it as instructions to my fellow white dudes:

1. Step up by being willing to step aside

Instead of offering your own idea, ask a co-worker for her opinion first. This works best if you do it once or twice casually on a personal basis before doing it in a group or meeting.

Doing so privately before hand can establish trust and help you understand if it's appropriate to do so in a group setting like a meeting, so that you don't accidentally put them on the spot.

If you do successfully help to elevate someone else in a group, congratulations you're using your white dude privilege properly, that's why you feel good.

2. Invert the situation in your head

When people address a group as "guys, guys", think about what it would be like if you were in a group and someone addressed you as "ladies, ladies". It's a trite example, I know, figure of speech, but ask yourself: why is there even a gender associated with that figure of speech? #culture

When was the last time you heard the words "aw, it's so great to see a man programmer, really brings some diversity of thought into the group"? or "really? you like beer? are you sure you don't want some wine or a fruity drink?"

Gender/racial/sexual bias is baked in to _every_ aspect of American life, so there should be plenty of opportunities to invert the situation and see how subjugating it would feel to be on the other side of things.

3. Learn where the gaps are around you

Be willing to ask your human resources department to provide you statistics of gender, race, and ethnicity in your organization. Look around at how many black dudes or women are in your group? How about people from outside your background? If they say no, ask why? You can't be fired for asking about this stuff. If you are, then be glad! You're no longer working at the wrong place to work.

4. Don't chalk things up to a stereotype

Please, dudes, please do not in your head justify the actions that a woman is taking with the fact that she is a woman. Do not think that he's thinking that way because he was raised in the ghetto (a.k.a. where all ignorant white dudes think black people come from). And for the love of whatever, please do not justify your homophobia by saying "so long as he doesn't try to hit on me, I'm cool with it".

Stereotypes limit people to presumptions you have about them regardless of their actions, which are the one thing we all control about ourselves. Reduce how someone chooses to put themselves out into the world, and you reduce your capacity to see clearly, to respect, to love, and to be loved.

I will never reach a point where I can't get better at listening. I'm terrible at it today, I hope to suck at it less tomorrow.

The more you listen (awareness), the more you maximize your opportunities. It's that simple. Action without listening is ignorance.

The practical way to do this is to write "STFU" on your hand, on your notepad or tablet before a meeting, or picture everyone in the room having it tattooed to their foreheads.

When you actively listen to someone, you express interest in them. People like to feel interesting, just like you, and giving that feeling to them as a gift is not a complicated or expensive affair. Both parties win in the end.

6. Find a liaison, socialize, and invite

It's intimidating to visit someone else's group or circle. The easiest way to smooth that social gravel is to have someone native invite you and liaise between you and the group.

Women in tech, take the time to bring a white dude to group. Black people, there is so much I don't deserve, but the privilege I have you're welcome to it so long as you're my friend. We share friendship, we share privilege. That's one way to get things flowing in both directions.

All of these things will feel awkward, not just for white dudes, but for everyone involved. Creating something new doesn't come easy. Easy is comfortable. If you're going to be uncomfortable, let it be because of something worthwhile.

Other people are worth it. Try again. Don't push it...if you're doing #5 well, you'll know when to back off. But don't let failure stop you from doing the right thing. If there are others doing the same, the effect of trying will multiply itself in time.