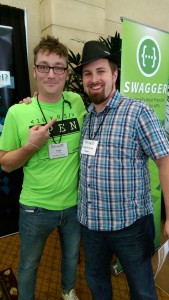 Defrag is legit. By "legit", I go with the urban dictionary definitions in that it is "real", "authentic", "truthful", generally a good thing.

Who am I? Just a guy who goes places and interacts with other real people, like this guy, Andy Rusterholtz who isn't even on Twitter yet.

Ramez Naam illustrated how our conscious perception of the world around us is very much a function of both sensory input and our memory of past input mixed together, never a perfect raw clear representation reality. He followed that up with proof that these squishy memories are entirely transmittable onto silicon. Want someone else's memories? They'll come mixed with yours, but we can do that now. He came in full Philip K. Dick style. This guy is within calling distance of Orson Scott Card via Wasteland 2 and Brin. Legit. 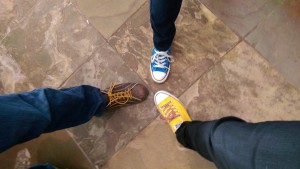 Mary Scotton put the whole keynote floor to rest with the depths of her compassion for considering the inequities of the industry around sexism, racism, and greed. Being inclusive is a responsibility we all share in common as humans who work for companies. Legit. She answered each of my quotes with a witty twitter mention to the original source of the quote or idea. Inclusive, ask Ben or anyone else she talked to, ever. Legit. "I don't have to have the same kind of talk with my son that African American parents have to have with theirs...", as she has a still photo of the Rodney King tragedy. Legit.

Bilal Zuberi. Great research. Great oration. Now that I've looked him up, typed hist name out, and referenced it in many conversations since yesterday, I'll remember it well. His ideas for how much we should invest in reaching higher as a human race through technology and how the best leaders are formed; no problem remembering them now either. Are we really trying to get liquor to your door faster via mobile app, or should we maybe cure cancer first, then celebrate after? Legit. 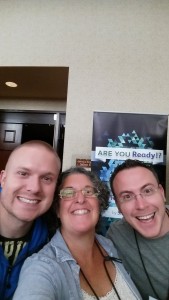 Lorinda Brandon. Mindful tech. It is socially irresponsible to let courts rule in favor of letting upskirt videos be taken, protected under "free speech" because they are recorded by a phone. What does that make a phone? Things don't go away once you share them. Also, she put the kibosh on Google images as a way to help law enforcement crack down on illegal pools but not on illegal acts of law enforcement. Legit. She makes advocating for privacy the new gold standard for how to show which institutions and governments are leaders and which ones aren't. Legit.

Lisa Kamm. Legit. Right after Lindy challenged Google's propensity for privacy snarls, Lisa bounces back by showing us all that we need to get the fuck off our phones while in transit. We are not efficient at either when we do both at the same time. The only demonstration in her talk was her demonstrating how to navigate complex topics gracefully. Legit.

Kin Lane. A great mind behind honest ideas like APIware and APIs.json, a new format for how to describe the API lifecycle, something he invents in his spare time. Legit. Thinker of thoughts. Most terse person in the world if he wants to be, recently so about the OAI and about Swagger. You just gave all the students at Defrag (myself included) a map for how to build businesses around API tech. Legit.

[Transparency. I was not able to make a few of the sessions that I only heard people talking about afterwards. Duncan's talk, for instance.]

Sam Ramji, we hope your shoulder feels better. Sad that you couldn't come inspire us. Hello world demos aside, I will look for some time with you like I did with Phil Windley where we can talk about some stuff that is important.

Anya Stettler. Renegade developer evangelist at Avalara. What the hell is a tax company doing paying for a badass, beautiful brain such as hers to come and speak? Same thing that Capital One is doing by convincing Lorinda Brandon to join their team. It's called financial technology, and it took over everything recently, did you know? Anya is shorter than I am, had more to drink than I did, and still kept going back and forth with Mick longer than I could. She knows who her people are. Legit.

David Nielsen. I missed his talk entirely, sat across from him a lot in two days, took no notice as he slept while sitting upright at "Indian" dinner with me and Emmanuel Paraskakis, only to wake up and lay down some serious story about working in India himself which to me at least made the already not-so-Indian food seem a less authentic. I still ate it up, his company and the food. Legit.

I could go on, but not really because I was busy having other conversations and missed all of day one and some of day two. Sad for me. Not legit. Also not legit, I missed the cloud foundry meetup last night.

The Legit Thing to Do: Say Thank You

Eric Norlin. Incubator. There were students all over this conference. A true sign of legit. I'll post on this topic more tomorrow, better timing for them and for Maria at StartupDigestCO #GSB2015. Eric and these kids are enabling the next great thinkers and business owners to connect up and are helping them make good choices about their careers from day one. Legit.

Kim Norlin. Consummate professional host and organizer. Just being in her presence make me know I will never hold a conference myself. I'll just ask her to either do it for a very hefty sum or a referral for someone else who can. She closed one of the bars down when there was no point in having it open anymore. Legit.

I let some students speak their peace about getting poached like river trout by VCs and sponsors with dollars. I'll post that tomorrow when I've had a few hours sleep between today and tomorrow, wait, no, today.

Also, I'll be speaking at APIstrat in Austin next week, asking the question "how early is too early for childhood development around digital devices and #techlife?"

Peace to us all, especially those involved in the tragedy tonight which writing this article has acted to help me avoid breaking down about.