I think we forget that we have trained a generation of children to commit mass shootings. "Video Trainings" like Call of Duty and Battlefield should be declassified as "video games" because killing is not a game. Likewise, we should re-sensitize to how alluring the symbol of a gun is to adults who need to feel powerful.

Yesterday, a neighborhood friend posted a photo of gun magazines in epic display at one of our local chain pharmacies. After mulling over what this meant for about this for 2mins, I responded: 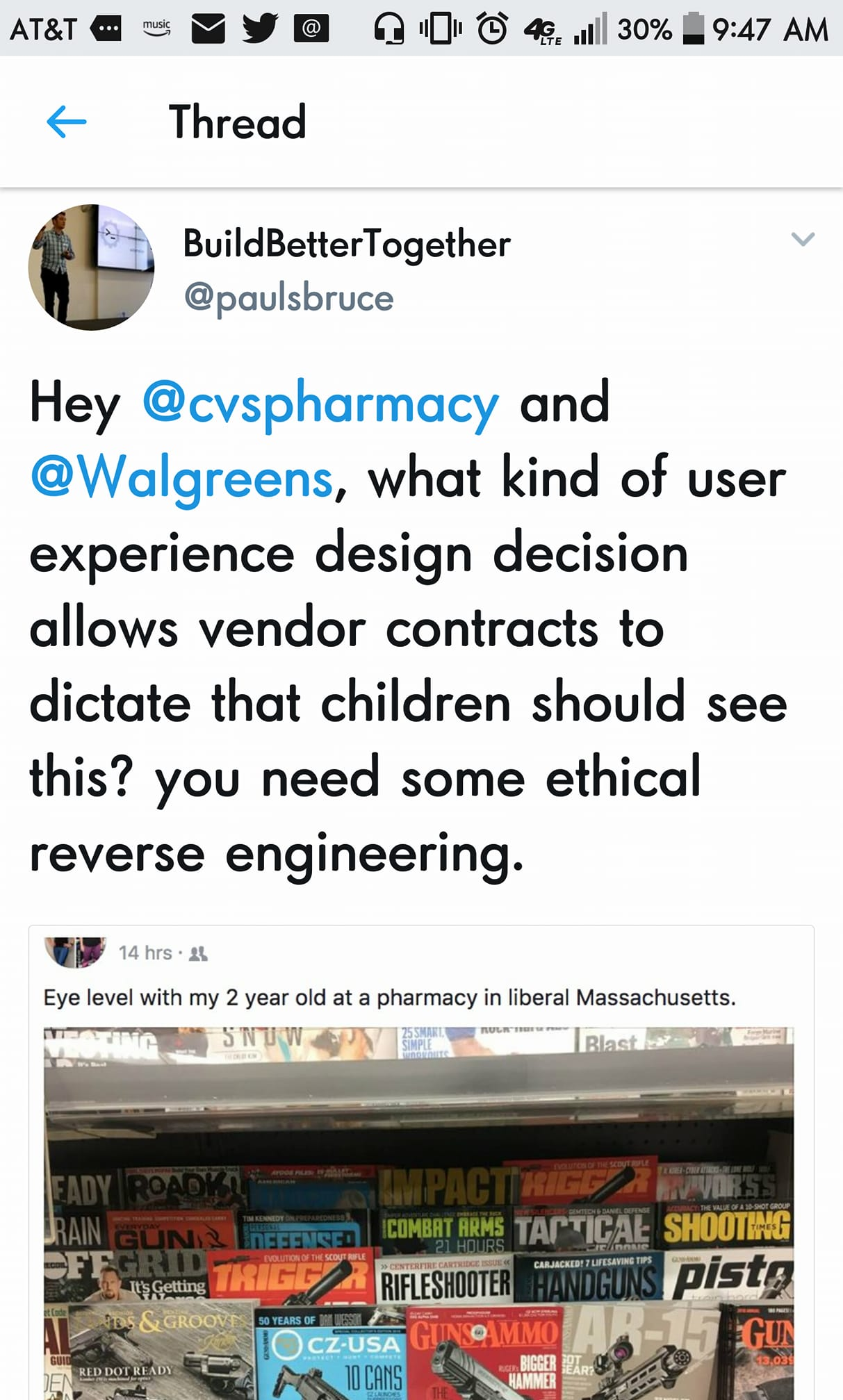 Granted, this is a liberal-as-fuck move, using social media to push against a brand publicly to take ownership for businesses and corporate contractual obligations. Thank you, yes it is.

What really concerned me is that there's a population of adults now who are apparently consuming this shit enough for there to be a rampant market for it...in the most liberal state in the United States. Either this anti-pattern was creeping up on us over years, or there's some serious money being pumped into this retrograde mindset that proposes the 2nd amendment meant for AR-15s to an inalienable right.

I highly doubt it was a rogue decision by a single branch manager because, having flown to Minnesota and Wisconsin this week, I saw with my own eyes that this was a reoccurring trend, same thing in Detroit. Like a signal to people who would use these kinds of fire arms that they should stock up quickly. A reminder that you can only safe if you pack more than the next guy, that enough bullets will solve any problem. I can't even imagine what it's like in the southern states right now, maybe they're gearing up to stage a Confederate overthrow.

It's the money that bothers me. To get this many separate magazine titles on a local rack, magazine not gun surprisingly, there have to be some serious contracts in place. This goes along with what the manager told a community member when confronted by the senselessness of this:

So vendors (of the magazines) must approve a change to floor placement in pharmacy chains? Sounds awfully like a well-known contractual obligation to me. Why would a gun magazine retail distribution contract stipulate that all gun magazines must be placed on the bottom rack? You must be 18 in order to become a legal consumer of a gun. Why wouldn't the magazines want to promote at eye level of their legal consumers?

"Mommy, Daddy, why don't we own a gun?" is a powerful thing for a parent to hear. And because you can get gun loans with no background checks in some states, practically anyone can rapidly resolve that question in lethal force.

I think the problem here is multi-level. Brands like Delta, United, MetLife, Bank of Omaha, Enterprise, Windham, and soon others publicly denounce the NRA while for-now-president Donald Trump and goons like Wayne LaPierre equally denounce gun control efforts. Figureheads aren't innocuous, they embolden an already primed generation. And on that...

When I was a kid, video games were a cursed luxury. I paid for my own Famicom...I mean, Nintendo Entertainment System...and games too. Repairs even, when I spilled cereal into the thing (don't ask me to reconstruct that memory please).

My conservative Christian parents begrudgingly lent me scant amounts of time on the family TV, that is until someone had the bright idea to put the NES on a small black and white TV that my recently passed Grampy had left to me. Spoiler: it was me. I am an engineer and things just occur to me sometimes. And I wanted to beat every goal that some big kid who made the game set for me. Inside there, I could do great things, certainly better than out in real life.

In my 'Xellenial' generation, most parents either didn't understand video games or otherwise weren't the type to care about much else. I made sure that in my house, video games would be a family activity. The one's we chose are puzzle-solving, narration read requiring, fun incentivizing pieces of amazing art by teams of people who love what they do. While some people struggle to get their kids to care about books at all, ours read so quickly through everything we bring home from the library that they create their own stories, which are more than often very interesting.

My partner and I have chosen to be very intentional parents. We feed our kids the best we can afford. We limit screen times to the weekends. We don't subscribe to religion. We are kind and sincere people. We will never give our kids phones because they will pay for them if it's important enough to them.

So it's easy for me to view video games as a good thing in my house. That's not so kids who have been given technology and no constraints. The habit is formed to scratch the itch to get what you want, to win, to watch the next one, until it's done. Unconstrained screen time encourages obsessive-compulsive personalities in kids.

Please just go to a GameStop and look at all the highest grossing titles. They're mostly first-person shooters like Call of Duty, Battlefield, Destiny 2, Wolfenstein, Sniper, Rising Storm, and get this..."Get Even", a story who's heroine has to shoot her way out of dungeons, office buildings, and SCHOOLS.

Killing is not a game. Interactive killing stories are not video "games", they are early video "trainings". Take away the killing, like in Mario Odyssey, where multi-player and assist mode help various ages in a family all progress through problem-solving challenges together, and you have an actual video "game".

[Note: listening to the Super Mario Odyssey background soundtrack, it's really great to hear that the musical director took the time to create an 8-bit version of the 44k version for the switch between 3D and 2D gameplay. That's like a little gift for me as a parent who grew up with these themes.]

Titles that include violence should be barred from sale as "video games" and be regulated under federal law the same as movies and other adult forms of entertainment. To these video game vendors, you make blood money and you should be eradicated along with the mental disease you spread.

"I would not squelch legislative efforts to deal with what is perceived by some to be a significant and developing social problem. If differently framed statutes are enacted by the States or by the Federal Government, we can consider the constitutionality of those laws when cases challenging them are presented to us” says U.S. Supreme Court Justice Samuel Alito. [ref] 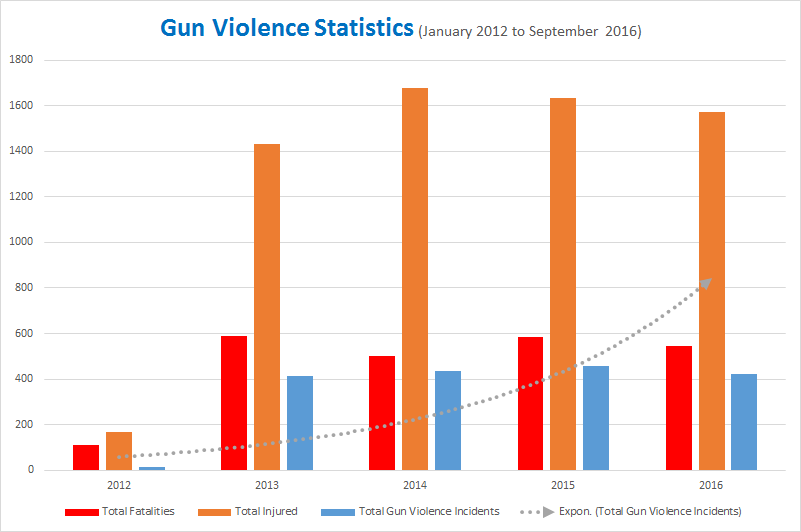 There are other statistics that indicate that gun sales are going up while homicides by gun is going down. The margin variance in units per home is often plotted against a seemingly dramatic drop in incidents of violence. The type of violence matters if we consider what kids have been "trained" to do: pick up a weapon, find a way out of a building, kill what gets in your way. The mentally ill underage in this country have an easy onramp to becoming a statistic more like this: 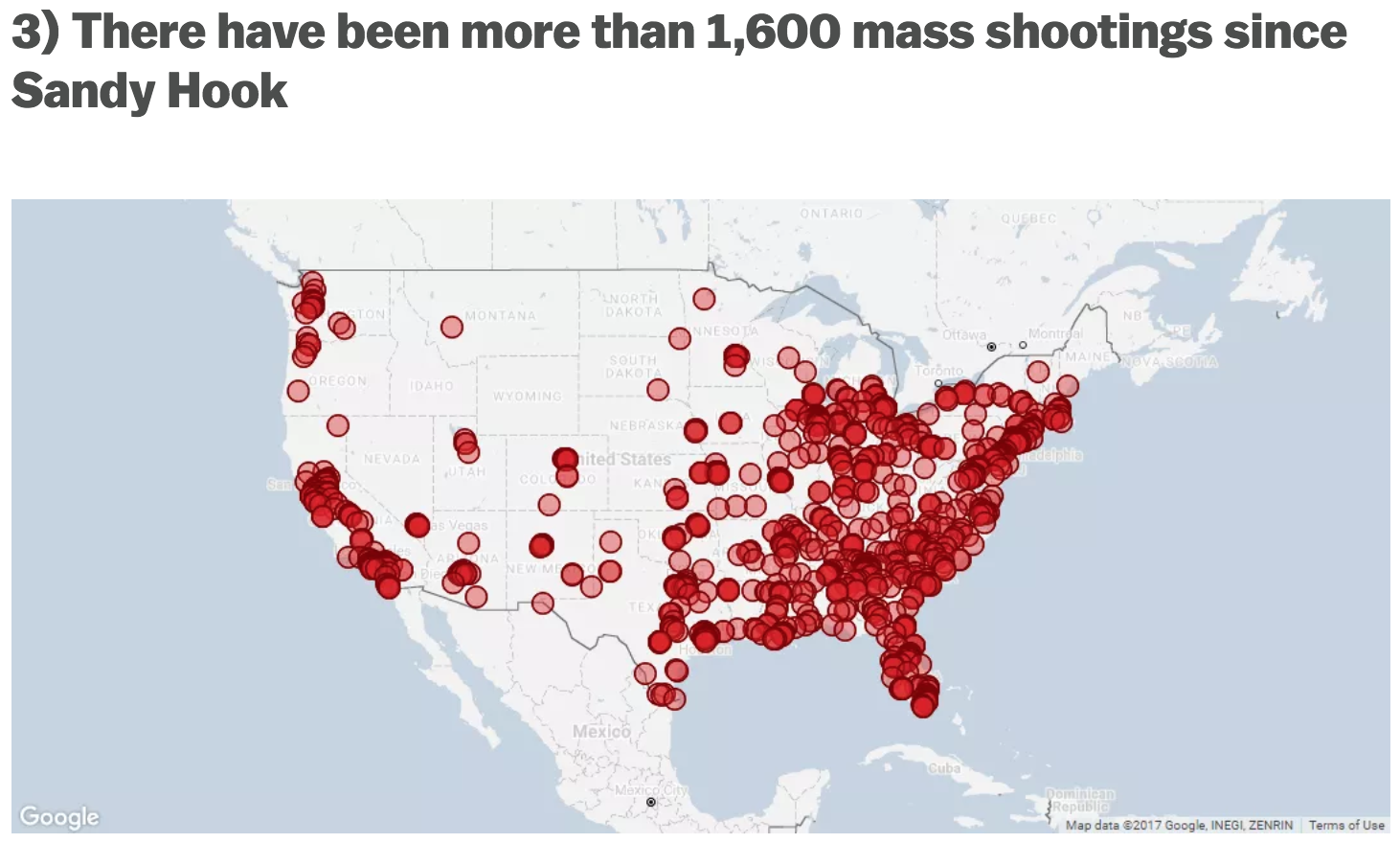 "The practices and beliefs of the founding generation establish that ‘the freedom of speech,’ as originally understood, does not include a right to speak to minors (or a right of minors to access speech) without going through the minors’ parents or guardians,” says Justices Clarence Thomas.

That's right, so when major pharmacies branded chains with managers that are members of my local community contractually decide to allow the NRA to engage with my children about owning a gun, when families allow children to play shooting games without limits, and when we don't confront these situations without hesitation when they arise, this is what creates a fatal national epidemic.

What do we do about it?

I drove to my pharmacies, grocery stores, and convenience stores to look for these displays. Find a few, tell them about the social movement and how they don't want that massive bad PR and inevitable sales dip next month due to boycott, and sometimes things change: 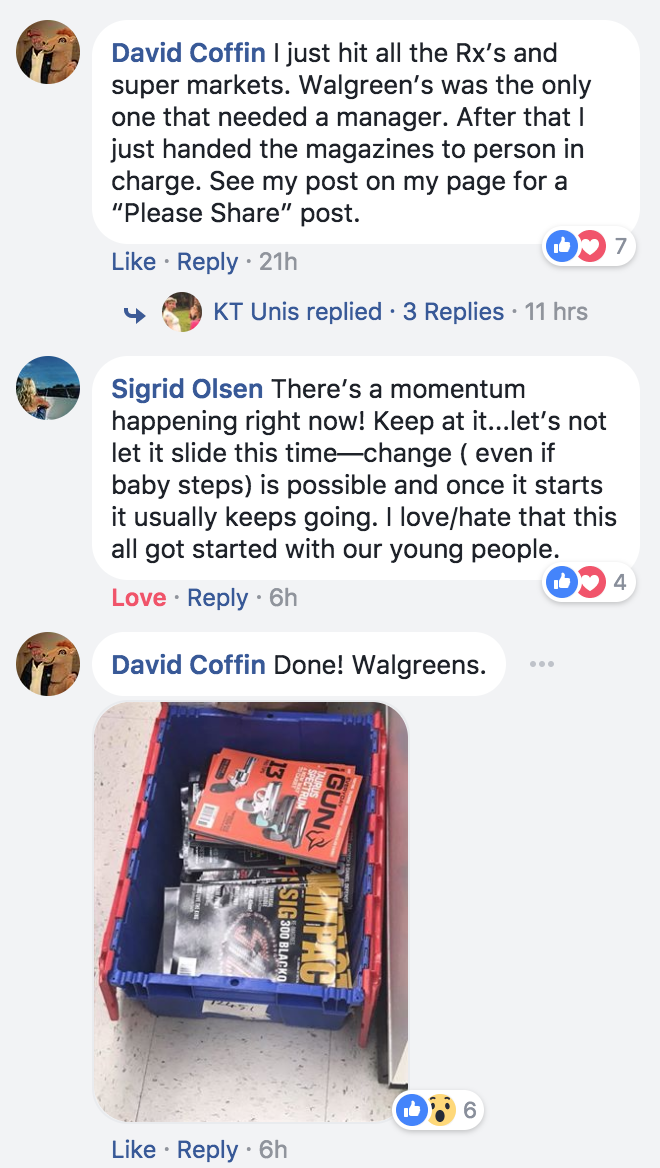 Still at eye level to a 2 year old, but at least the surface area for little eyes is reduced. I'd rather have Rachel Ray glaring at them than the muzzle of an AR-15.